In order to understand how vision is impacted by either albinism or aniridia (or any condition that affects the anatomy of the eye), it is helpful to have a very basic understanding of how vision works in a ‘normally’ developed and functioning eye.  Once you understand the function of each of the components of the eye, you will be able to better understand how changes in these components impact vision.

The eye is the organ of sight, a nearly spherical hollow globe filled with fluids (humors).  The eye has three ‘layers’:  the outer, middle, and inner layer.

The outer layer (sclera, or white, and cornea) is fibrous and protective. The front of the outer layer is clear – like a window – and is called the cornea.  All light must first pass through the cornea when it enters the eye.

The middle layer, or choroid is vascular; it contains the blood vessels that supply blood to the structures of the eye.  The front part of the choroid contains two structures:

The innermost layer (the retina) is nervous or sensory.  The retina is the light- sensing portion of the eye.  It contains rod cells, which are responsible for vision in low light, and cone cells, which are responsible for color vision and detail.  The macula is in the back of the eye in the center of the retina.  In the center of macula is an area called the fovea centralis.  The fovea centralis contains a high concentration of only cones and is responsible for seeing fine detail clearly.

When a doctor looks at the back of your eye through an ophthalmoscope, here’s the view:

Inside the eyeball there are two fluid-filled sections separated by the lens. The fluids in the eye are divided by the lens into the vitreous humor (behind the lens) and the aqueous humor (in front of the lens). The lens itself is flexible and suspended by ligaments which allow it to change shape to focus light on the retina.

The lens is a clear, flexible bi-convex structure about 10 mm (0.4 inches) in diameter. The lens changes shape because it is attached to muscles in the ciliary body. The lens is used to fine-tune vision.

Covering the inside surface of the eyelids and sclera is a mucous membrane called the conjunctiva, which helps to keep the eye moist. An infection of this area is called conjunctivitis (also called pink eye).

How We See (or Perceive Light)

Humans need light to see.  When light enters the eye, it first passes through the cornea, then the aqueous humor, lens, and vitreous humor. Ultimately the light reaches the retina, which is the light-sensing structure of the eye. When light contacts the rods and the cones in the retina, a series of complex chemical reactions occur. The chemical that is formed (activated rhodopsin) creates electrical impulses in the optic nerve. The nerves reach the optic chasm, where the nerve fibers from the inside half of each retina cross to the other side of the brain, but the nerve fibers from the outside half of the retina stay on the same side of the brain.  These fibers eventually reach the back of the brain (occipital lobe). This is where vision is interpreted and is called the primary visual cortex. Some of the visual fibers go to other parts of the brain to help to control eye movements, response of the pupils and iris, and behavior. 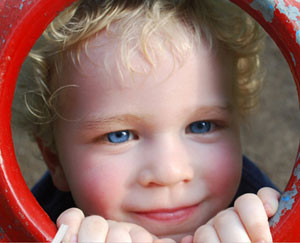